Formal discussions concerning the establishment of an airport in New Bedford were held in March of 1939. The proposed building of the airfield would become a WPA (Works Project Administration) project.

Ground was broken for the New Bedford Municipal Airport on April 9, 1940. The airport was officially dedicated and approved as a commercial landing field by the Massachusetts Aeronautics Commission on April 28, 1942. The airport consisted of two 3,500 ft. paved runways with lighting systems.

On November 12, 1942 upon request from the War Department the City turned the airport over to the U.S. Government to support the World War II effort for the duration of the war and for 6 months after its end. The field was occupied by the Army Air Corps which performed Atlantic Coast Patrols. At that time, the two runways were extended to 5,000 ft. in length and a hangar and several support buildings were constructed.

In April of 1944, the U.S. Navy took over control of the Airport and used it as a training post and auxiliary facility to the U.S. Air Station at Quonset Point, Rhode Island.

Anticipating the release of the Airport from the War Department, the City Council Committee on Ordinances, in 1946, proposed an ordinance for the creation of the Airport Commission. The Commission has the responsibility of the “care, custody, control and management” of the airport.

In August of 1950 an Administration Building was constructed along with an Aircraft Rescue Fire Fighting building. Both buildings were completed in October of 1951. In 1957 Aviation history was made at the Airport when Omega Aircraft Corporation test flew the world’s first twin engine utility helicopter. In 1958, the FAA took over the Air Traffic Control, old military structures were removed and major drainage and lighting improvements were performed.

In the 1960’s and 1970’s, the airport continued to improve its facilities by continuous expansion of airport aprons and airport infrastructure.

In the 1980’s the airport served as a regional passenger hub with direct flights to Boston and New York. Over 50,000 passengers used the airport in one year. 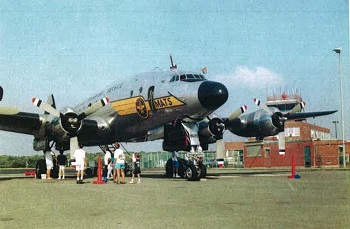 A Super Constellation on display at EWB

During the 1990’s New Bedford Municipal Airport became New Bedford Regional Airport (EWB), an accurate reflection of the geographic region served by the airport. This designation aligns with the City of New Bedford serving as the hub city for the South Coast region of Massachusetts.

In 1998 the Airport Commission received a major grant from the Massachusetts Aeronautics Commission for remodeling and renovation of the Terminal Building as the airport became a convenient aerial gateway to Cape Cod and the islands of Martha’s Vineyard and Nantucket.

During the mid-2000’s New Bedford Regional Airport became home to the Bridgewater State College aviation program, operated by Delta Connection Academy (DCA). Following the departure of DCA, in 2008 Bridgewater launched an in-house flight school. Presently, now known as Bridgewater State University, the school operates a fleet of eleven (11) aircraft and continues to make up a large portion of the annual operations at New Bedford Regional Airport.

From 2010 through 2014 the airport underwent an extensive 5-year, $30 million program of projects aimed to modernize the facilities and prepare the airport for future success. The projects included obstruction removal, safety area construction and eventually the reconstruction and 400-foot extension of Runway 5/23. The result is a fully compliant, 5,400’, grooved, Runway 5/23 served by an Instrument Landing System (ILS) and new MALSR approach lighting systems; a truly all-weather runway. New Bedford Regional Airport is also home to the only “Localizer Back-Course” approach procedure in the Northeast United States.

Currently, about 20,000 passengers per year use New Bedford Airport (EWB) for their travel to Nantucket and Martha’s Vineyard.

The present Airport Administration is working diligently to improve the facility. These efforts include working towards new infrastructure, new based businesses and increasing measurable statistics such as enplanements, based aircraft and operations.

Thank you to Greg Cormier from Cape Air for providing the images for this History page.