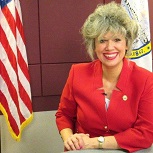 At the age of 19, Debora became a successful businesswoman. She sustained and grew her business in the city of New Bedford for over 20 years. As a small business and homeowner, she worked hard in building up her community. She’s an advocate in making sure all city services are equally distributed throughout all neighborhoods by continually holding accountability in all areas of local government. Debora is fully committed to community, family, and education. She and her husband enjoy harbor walks and local car rides. She is currently finalizing her Master’s Degree in Public Administration at Bridgewater State University.

Councillor Coelho’s history of commitment to New Bedford include:

She has also graduated from: