In his accompanying letter to the Council presenting the $365 million general fund budget, Mayor Mitchell wrote:

“The situation facing New Bedford is unlike anything we have experienced before. Ordinarily, my proposed budget comes to you in May for the City Council’s consideration and adoption before the beginning of the new fiscal year on July 1. The arrival of a worldwide pandemic, however, has resulted in widespread illness and death, and has plunged the United States into a severe recession.

“New Bedford has responded skillfully to this crisis. Given our city’s older-than-average population, the pervasiveness of underlying health conditions, and our industrial workforce, we have managed to navigate the first wave of the pandemic better than anyone could have predicted. I am grateful for the City Council’s active support over the last several months and for standing behind the City’s residents, who have responsibly and admirably adjusted their daily lives.

“Nevertheless, the COVID-19 pandemic has inflicted tremendous loss and hardship here. Over one hundred New Bedford residents have died from the virus, more than 2,000 have tested positive, and hundreds of our residents have fallen ill. As of May 2020, the City’s unemployment rate stood at 23.9%, up from about 5% before the onset of the pandemic, the volume of home sales was down by 11.9% in comparison with 2019, and local revenue had declined substantially. Behind these numbers are our fellow residents who have suffered the loss of jobs or even family members. There is also considerable uncertainty about the future. While the city has begun cautious movement toward allowing businesses and other activities to reopen, the pandemic rages elsewhere and it will assuredly affect our daily lives in the years to come.”

Mayor Mitchell noted that New Bedford weathered the last quarter of Fiscal Year 2020 despite the precipitous declines in revenue, helped in part by the City’s conservative approach to budgeting and proactive steps including the freeze on hiring and discretionary expenses imposed at the start of the pandemic. However, Mayor Mitchell noticed that there is considerable uncertainty that has made development of the proposed budget especially difficult, and that the budget could be adjusted if the updated state budget, when produced, differs substantially from the estimates in the proposed budget.

1. State Aid: State aid constitutes more than 50% of general fund revenue, and the Commonwealth has not provided updated guidance regarding FY 2021’s outlook. Some outside groups, including the Massachusetts Taxpayers’ Foundation, are projecting shortfalls of as much as $6 billion, leading to significant uncertainty. The FY 2021 budget assumes education aid will not change from FY 2020, despite the passage of the Student Opportunity Act.

2. Local Revenue: Revenue collection is down across the board, and even with curtailed spending, the City anticipates net shortfalls in several major funds. As a result, significant realignment of the budget is necessary in FY 2021.

3. Mandated Costs: The City anticipates a significant increase in mandated costs for education, and that the potential funding established by the Student Opportunity Act is no longer likely. In addition, employee benefit costs, including pensions, will increase. Nearly $1.7 million will be added to the City’s pension assessment.

As in past years, Mayor Mitchell noted that there are very few places to cut or restructure the City’s budget, with approximately three quarters of the general fund budget predetermined by state mandates and regional agreements. 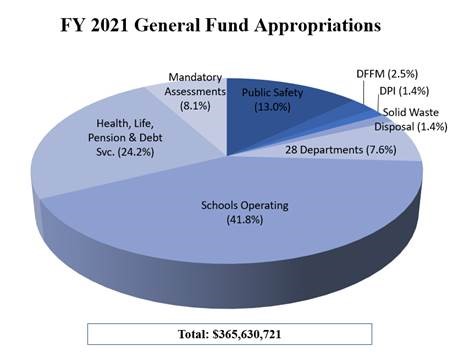 The FY 2021 budget proposes significant belt-tightening measures, designed to control spending without diminishing services in City government. Specifically, the budget seeks to avoid both layoffs of City employees as well as a change in the level of service provided to City residents. The budget utilizes a combination of the City’s certified Free Cash fund, as well as a $2 million transfer from the Stabilization Fund, to mitigate the impact of the current economic disruption at this challenging time.

Several initiatives to streamline City government and create efficiencies without losing services are proposed in the FY 2021 budget:

– Desk officer positions will be eliminated in the Police Department. The staff will not be laid off but reassigned to the field to provide more effective public safety services to the City’s residents.

– Due to a recent streamlining of dispatch protocols that has reduced the Fire Department’s need to respond to medical calls rather than fire-related calls, Engine 8 will be decommissioned, and ten vacant firefighter positions eliminated. This will not result in the closure of a station. A portion of the savings will be used to assess the future configuration of fire stations in the North End of New Bedford, as was completed for the South End. There will also be added capacity in the Emergency Medical Services (EMS) Department to effectively respond to medical calls through EMS.

– Three full-time and one part-time position in the City’s business offices will be reallocated to fund centralization of certain payroll and accounts payable functions, which will lead to further streamlining throughout city government by removing redundant activity from the 32 operating departments.

– The Ashley Park Senior Center will close to further efficiency to the Council on Aging, with consolidation of senior programs at the Buttonwood Senior Center and Rosemary S. Tierney Community Center at Hazelwood Park.

– The New Bedford Public Schools budget has been adjusted to reflect the impact of reduced state aid.

– The Buttonwood Park Zoo privatization initiative will be advanced to reduce the growth in long-term legacy costs, such as retirement and health insurance.