How the Wastewater is Treated 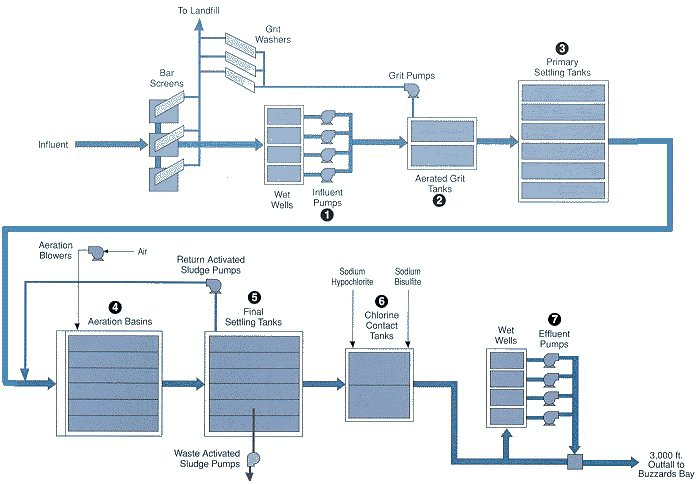 The facility uses the activated sludge treatment process, which uses nature’s own biological means of purification, but in a faster, more concentrated way.

When wastewater enters the facility, it flows through one or more of the mechanical bar screens which automatically remove any rags, sticks, and other large debris contained in the wastewater. The screened wastewater is then pumped by one or more influent pumps (1) to one or two aerated grit tanks (2) for grit removal. The settled grit is pumped to grit washers where the grit is separated from the water and washed to remove organic matter before final disposal at a landfill.

After passing through the aerated grit tanks, the wastewater flows through a channel and then enters the primary settling tanks (3) where the solid material in the wastewater is removed. The settled wastewater then flows into the rectangular aeration basins (4) where biological organisms, called activated sludge, are grown in the presence of oxygen and mixed with the incoming wastewater. This combination is called mixed liquor. The biological solids in the mixed liquor feed on the organic matter in the wastewater, breaking it down by natural process to carbon dioxide and water.

The flow then enters the final settling tanks (5) for separation of the biological organisms from the mixed liquor. A portion of the solids removed, called return activated sludge, is then pumped back to the aeration basins. The remaining solids, referred to as waste activated sludge, are collected and pumped to the sludge processing building for further processing.