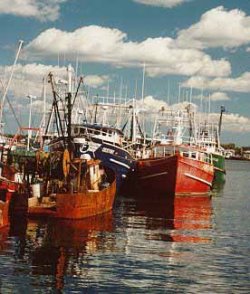 For over a century it was home to the whaling industry, peaking in 1857 when its port flourished with a fleet of over 300 ships. For many years since then New Bedford’s coastal resources have continued to be a source of the city’s prosperity as fishing for scallops, lobsters, and yellow tail flounder have made a stable contribution to the city’s economy.

New Bedford’s waterfront is also well known for it military importance. Clark’s Point, where Fort Taber stands. occupied a strategic defense position from the time of the American Revolution through World War 1.

The fort is named for Mayor Isaac C. Taber, who pushed for its construction in 1860 to prepare the city for its role in the Civil War. In an historical irony, the fort is also linked with the name of Confederate General Robert E. Lee, who had originallycontributed to the f’ort’s design in 1846.