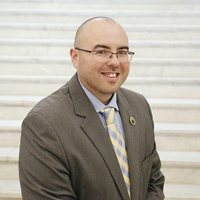 COUNCILOR AT-LARGE IAN ABREU WAS FIRST ELECTED IN 2015. Councilor Abreu was then subsequently re-elected to the New Bedford City Council 2017 with a second highest vote total in the Councilor At-Large race with 7,468 votes.  He is a lifelong resident of New Bedford and is married to his loving wife, Samantha. They have one daughter, Adriah Les, who was born on May 27, 2016. He is a proud graduate of the New Bedford Public School System

After graduating from New Bedford High School in 2004, Ian went on to attend Bridgewater State University where he received a Bachelor of Arts Degree in Communication Studies in 2009. He also holds a certificate of completion from the Connecticut School of Broadcasting and Media.

Ian is currently the Manager of Workforce & Business Development with the New Bedford Area Chamber of Commerce. He oversees all Chamber-related workforce development, government affairs and educational initiatives throughout the Greater New Bedford community. His duties also include the handling of all membership recruitment, retention, marketing and public outreach.

In addition, he also serves in the capacity as an advisor to New Bedford High School on the Education and Industry Coordinating Council (EICC). The Education and Industry Coordinating Council (EICC) is a group of business and workforce development leaders who advise and oversee New Bedford High School’s Career Academy models. The role of the committee is to shape program curriculum, development and execution to ensure all participating students are “college and career ready.”

Prior to his current post at the Chamber, he had the privilege of serving as a Re-entry Case Manager for Bristol County Sheriff Thomas Hodgson for over two years.

He is also very proud of his Portuguese ancestry, having ties to both the Madeiran and Azorean islands.

Councilor Abreu can be reached at: