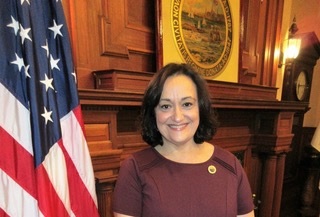 Maria Giesta was born in 1962 in the Azores, Portugal and immigrated to the United States with her family in 1966 and settled in New Bedford, Massachusetts.  She is the daughter of Valentina C. Giesta and the late Jose F. Giesta.  She attended and graduated from Charles S. Ashley School, Normandin Junior High and in 1981 graduated from New Bedford High School.

In 1985, she graduated from Southeastern Massachusetts University (SMU), which is now UMASS-Dartmouth with a degree in Political Science.  After graduation, she was hired by then Senator John Kerry as a staff assistant in his Washington, DC office.  She climbed through the ranks in the office and ultimately became his Assistant Scheduler and Special Assistant.

In 1989, she was hired by Congressman Barney Frank as his Scheduler and Office Manager.  During her 23 years of service in Congressman Frank’s office, she became his Executive Assistant, Deputy Chief of Staff, and then reached the pinnacle of her career in 2009, when she became the Congressman’s Chief of Staff/Staff Director.  She was also a Professional Staff Member on the Financial Services Committee.

In 2013, she retired from federal service and decided to return to New Bedford to be with her family and back to the community she knew and loved.

In November 2017, Maria was elected as a New Bedford City Councillor, Ward 2.

She resides in New Bedford, MA

Vice-Chair of Licensing and Zoning for Cannabis; The Airport; Environmental Affairs; and Budget Review