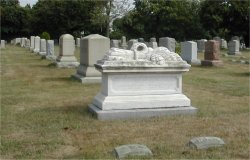 This cemetery was opened in 1843 and comprises nearly one hundred acres, also. However, this cemetery is divided by Parker Street, that is, the old part is located on the south side of Parker Street and the new part is on the north side. Many notables are interred in this cemetery, such as:

Medal of Honor recipients –William H. Carney, John Duffy and William Brownell; Richard A. Canfield– he broke the bank at Monte Carlo; Edward Mott Robinson (father of Hetty Green who became the richest woman in the world); Sylvia Ann Howland (aunt of Hetty Green, ) for whom a library is named in the south end of this city. Mr. Robinson was known in his lifetime as “Blackhawk Robinson” was an important owner of whaling mechant ships. When he died June 14, 1865, at the age of 65 years, he left his daughter Hetty Green, a million dollars and the income from eight million dollars.

Colonel E.H.R. Green, also a son of Edward Mott Robinson, and a nephew of Sylvia Ann Howland, owned a large estate at Round Hill in South Dartmouth, Massachusetts an adjoining town. The big metal hanger which formerly housed a small dirigible used in radio experiments became the shelter for a unique and powerful “atom-smashing” apparatus evalued by M.I.T. scientists and the occasional scene of atom-smashing experiments . (Colonel Green is not interred in this cemetery).