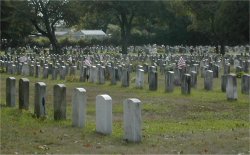 Former Mayor of New Bedford, Leo. H. Carney, is interred within. Entombed in a new mausoleum, constructed after his death, is the late Bishop Charles H. Grace, leader of the church “United House of Prayer for All People”. Mr. Grace died in 1963.

This is the smallest of our city-owned and operated cemeteries, as it comprises of only about 50 acres. Originally, the land on the west side of Ashley Boulevard was a part of this cemetery, however, in the early 1970’s the Cemetery Board relinquished this part and sold it to the Greater New Bedford Regional Vocational High School, which has since been built and which comprises of a very large and beautiful campus.